Maybe it is Not all About the Attendance?

It is kind of funny that the city of St. Petersburg, Florida is complaining about a $ 1.25 million dollar 2010 deficit after providing Rays fans with an envelope of protection, direction and the general upkeep needed for the Tampa Bay Rays remain tenants at Tropicana Field. Could the city have finally realized what the Rays have been complaining about and be asking for their own dose of empathy right now.

I extremely doubt it. It might just be the increasing stress of the city to still keep trying to fork out a $ 6 million dollar annual bond payment for the Trop boosted by an unknown cost deficit that seems to balloons the debt to a higher threshold this year. Then again, the city might not have provided themselves any revenue influx protection for itself heading into this economic downturn that has engulfed the region as a whole.
Suddenly the city of St. Petersburg staff was awoken by the Trop’s operational costs skyrocketing upward even as the Rays revenues did not drop into the red. But the city’s outlined contractual agreements providing police assistance pre and post-game has elevated along with another source that could not have been estimated or foreseen back in 1995 when the first agreement was signed by then Rays Team President Vince Namoli and the city of St. Petersburg.
Could the city’s officials premature optimistic thinking back in 1995 prior to their initial stadium agreement with the Rays that the team would/could draw up to 3 million fans a season been a forecast for the present financial disaster besetting the city? Current St. Petersburg Mayor David Foster was right in the center of the action back in 1995, and was one of the city staff members beaming at the potential windfall of seeing 3 million fans attend baseball games, and an additional figure up to 300,000 of fans traveling through this great city for concerts, football and non-baseball events each year.
The reality today is that only a handful of concerts or events take place between the last Rays game of the season and the beginning of Spring Training within Tropicana Field..
If this 1995 scenario had actually worked out, the city would have received an estimated $ 4000,000 windfall ( with 3 million fans ) during the Rays first full season in 1998. Back in 1995, there was the enthusiastic promise and monetary pledges of 32,000 local citizens showing their early support for the Major League Baseball squad. And the excitement piggybacked on the optimistic forecast that the Rays also could bring in 3 million plus fans like their MLB brethren the Florida Marlins did during their first MLB season. Supporting Major League Baseball looked like a sure fire bet for both communities in Florida at that time.
The scenario then began change drastically for the city when the recession began to take hold of this Tampa Bay community just as the Rays began to establish a winning tradition. With their new found winning ways, the city banked on the fact that the Rays would eventually transform from a break even or losing investment to a slightly profitable arrangement for the city. But they did not play into the mix a huge increase in day-to-day costs of providing the services and insurance needs of supporting the hometown Rays.
With deeper budget cuts and fiscal downscaling still on the horizon, the city knows that the Rays and City of St. Petersburg contractual agreement in regards to Tropicana Field is the one program that can not take a budgetary hit, or it could turn further sour for the city. There is no way anyone could have even envisioned this a fiscal fiasco 15 odd years ago in connection with the Rays playing in the city. Optimism reigned supreme in 1995 and even with a hint of impending darkness, the light at the end of the tunnel shown bright like the Rays post-2007 logo.
Could this once sleepy town known more for it’s green benches and Spring baseball downtown have bitten off more than it could chew? Could the sound of the fife and drum calling for everyone to get behind this team back in 1995 blindsided the city to leave some of its municipal common sense at the doorstep. Could another factor not even a pending issue in 1995 provide the lubrication for the eventual fiscal slide by the city towards this deficit. Did the rippling effects of the September 11th terrorist attacks filter down to play a part in the city’s troubles today?
According to a St. Petersburg Times article, the city of St. Petersburg paid about $ 160,000 a year in property insurance premiums back during the early years of the Rays playing at Tropicana Field. After those horrendous attacks on September 11th, the city’s insurance premiums instantly quadrupled to around $ 760,000 annually. Add in a few devastating Hurricanes that destroyed and pummeled communities around and near Tampa Bay and the city of St. Petersburg’s property insurance premium suddenly ballooned to around $ 2.2 million. Even with a slight reprieve in 2010 of the premiums scaling back to $ 1.7 million , the fiscal damage had already been done.
There was a thought briefly that the Rays partnership offshoot of the forming of the Sunburst Entertainment group within Tropicana Field might help bring in additional concerts and events to Tropicana Field and boost the probable revenue stream a bit for the city. But those events have not yet materialized and combined with the Rays management selling their shares of a regional United Football League (Orlando) franchise, it appears the St. Petersburg Bowl held during mid-December will be the only substantial non-baseball event to be held at Tropicana Field besides the yearly trade shows before the Spring. 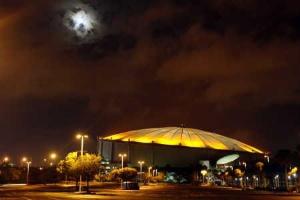 Escalating insurance costs are still the main culprit in the city not being able to turn the Rays revenue plan into a positive offering in the city’s coffers. Low attendance figures at Rays 2010 games only plays a minor role. Still the city of St. Petersburg and the Rays need to find a viable solution towards a profitable management scheme to bring events besides baseball constantly flowing into Tropicana Field between the Rays last scheduled game and their future opening day date.
The city of St. Petersburg currently nets only .66 cents for every ticket scanned at Tropicana Field. In 1998, the Rays first season, the city took in only a $33,000 windfall even after 2.5 million fans graced the Trop’s seating areas. Much less than the estimated revenues forecasted in 1995, but still a profit. Even with 1.9 Rays fans attending games in 2010, the city only garnered $ 984,000 dollars in revenues from ticket sales. Quickly the dome’s property insurance premiums ate the figure up providing no financial relief for the city.
Back in 1995 the local St. Petersburg vibe was alive with the Tampa Bay Storm winning Arena Football League Championships, and the Tampa Bay Lightning making their first postseason NHL appearance at Tropicana Field when 28,103 fans tucked into the domed stadium for a playoff series against the Philadelphia Flyers. Since then the concerts have disappeared from Tropicana Field accept during the Rays Saturday Night Concert Series, and the Lightning and Storm vacated the Trop for a new arena built on the channel in Tampa.
With the Rays ownership constantly looking eastbound to the other side of the bay for a possible stadium site, it is due time for the city of St. Petersburg to become increasingly proactive to not only insure, but assure that the Rays can play their baseball within the city limits of St. Petersburg for a long, long time. But that side of the bay is also crying municipal deficits that might hinder stadium discussions right now.

Either the Trop has to become a more feasibly functioning business asset or the loss column will only grow bigger for the city of St. Petersburg. Something has to give in this fiscal tug of war. Hopefully it will not end up with the city finding itself sprawled out on the ground with the Rays taking their balls and bats and leaving for another home. But sooner more than later, something has to give.

Sounds like a perfect storm of problems for St Pete and the Rays: the economy, the Trop itself and the budget cuts. Not an easy solution from what you describe.

Jane,
Baseball right now is the top attraction for this region during the last year because so many of the usual out of town tourists who flock here in the summertime think our beaches were covered in small tar balls or a oil film.
Tourism dollars were lost and in conjunction with a small baseball revenue, 1 +1 = a loss.
Every city is counting their pennies, just seems that with the Rays wanting to build a new stadium people forget that the localo governments have to have a little coinage first.

Man, I hope your Rays don’t leave you just when they are starting to become relevant. I’m worried about my Minnesota Vikings, too, as a new football stadium isn’t an easy sell here in Minny, either.
http://zkonedog.mlblogs.com/

I knew Florida was hit harder in the recession than pretty much any place else in the country but I hadn’t really thought about continuing recovery from the hurricanes and such on top of everything else. Yikes. I hope St. Petersberg and the Trop can find a way to make things work to their mutual benefit.
http://blithescribe.mlblogs.com/

Zkonedog,
Since most of the stadium bonds will be paid off by 2015, that could be the earliest the Rays could even consider talking about another site outside the city.
But then again, the City of St. Petersburg will make them honor or pay a huge settlement to even attempt to leave or go elsewhere.
Not trying to put the cart before the horse here, but it is a long shot right now to even think about the issue until the Rays open their mouths first.

I’ve been to Tampa and St. Pete quite a few times. In my opinion, the best location for the Rays to have a stadium was already taken by the Yankees spring training facility on Dale Mabry highway. Either way, I don’t like the idea of the Rays moving now or in the future.

Blithe,
Always seems like it is something here in the last few years. Recession,Hurricanes or even the thought of tar balls on the clear green waters.
But it is something this community has lived with since it was just a patch or orange groves and called Hillsborough Point.
It will rebuild,reorganize and rise again, the problem is to what extent will the damage be to the Rays/St. Petersburg arrangement.

Ron,
Funny you mention that site.
It is one of the reasons that a Rays stadium in Tampa might have to be privately financed. In recent years the city of Tampa spent a lot of $$$ in bond allocations to spruce up George Steinbrenner Field and keep the Yankees happy in the Spring Training home.
That bond is one of the reasons that any future bond consideration before possibly 2015 could cripple that region fiscal coffers and lead to possible ruin.
Going to be fun to see how the Chess match is played over the next 2 years.

Jeff,
I know personally at this moment the Rays will lose at least one member of the crowd. The economy will get better, and hopefully the upward pulse will flow back towards getting this region healthy soon.
Worst part of it is I have to write passages like this one and bring a hint of negativity to a team that has given us joy in this region in the last few years.