Friedman Would Be a Coveted Cubs Acquisition 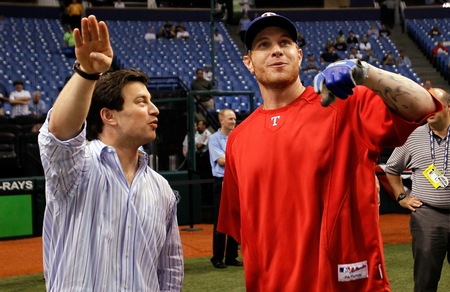 Most of the Rays Republic remembers when Tampa Bay Rays outfielder Randy Winn was traded basically so the team could sign former Mariner’s Manager Lou Piniella. Could we be possibly heading towards the same scenario with Vice President of Baseball Operations Andrew Friedman?

It is way to early in the Chicago Cubs General Manager outreach process to venture solely into this scenario, but it does warrant at least a peek. The Cubs did get an up front and personal shot at the cunning and creative thinking of Friedman and his construction of a trade in the 2011 Winter Matt Garza deal.

What is amazing is the perception still lies in the hearts of some on the North side of Chicago that the Cubs got the best end of that deal. Others, like the Rays Republic know that Friedman pulled another beautiful rabbit out of his hat and has already gotten a great return on his swap.

Think about it for a moment. Sure Chi-town got the ever scowling Garza and his bag of tricks, but Friedman got a newfound Legend (Fuld). Friedman only has to look at the box score of his Triple-A team, the Durham Bulls to see OF Fernando Perez, another component of the Cubs trade back in the Rays system after being released by Chicago.

People around Tampa Bay are getting a bit worried that if Friedman does take a meeting with the deep-pocketed Ricketts clan. Amazing enough he only has to sit down next to his own Senior Advisor Don Zimmer who took command in Cubs stripes to hear about the advantages and struggles he would have with such a move Northward. But don’t fret yet Rays Republic, Friedman seems to love the challenge of the Rays opportunity.

But there is also a once in a lifetime challenge of helping structure and realize another World Series title in a town that yearns, begs, pleads for another chance at glory. Knowing Friedman he would have the Cubs institute a “Goat Day” where goats got in FREE just as a humorous and innovative way to ease the burden of the long held curse of Wrigley. 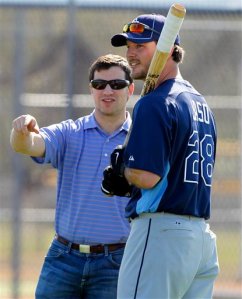 You know the Rays and Friedman are going to be confronted with this situation. Even Garza, who was traded by Friedman is shouting his name to the Heavens as a key component of the Rays climb from the cellar to contenders in such a short time span.

We know the Boston Red Sox will do everything in their power to block a chance of Theo Epstein even texting the Cubs organization. With a tongue-in-cheek comment a few days ago from someone that the Cubs want to build a Red Sox Nation in the West, battle lines and formations both by the Boston fans and front office went up fast to secure any chance of a Epstein defection or seduction.

Friedman has one of the most innovative minds since Oakland A’s GM Billy Beane. The “Rays Way” has been a perfect model of how to build a competitive unit with a minimalistic budget. Friedman’s team is responsible for one of the best scouting units and farm systems in baseball. Even if Friedman isn’t submerged in the day-to-day heartbeat of this system, he gets the glowing comments by association.

How ironic would it be if Friedman did get a chance to go to the friendly ivy-lined confines of Wrigley Field. Would he be treated like a King, possibly warbling a rendition of “Take Me Out to the Ballgame” from that heralded spot in the booth? Would he be given the key to the city? Possibly get a sandwich named after him at one of the area’s best bistros?  Or maybe he could get a coveted cameo in the “Ferris Bueller” remake? That is what happens to those who fall into the arms of the Cubs faithful, they feel the warmth. 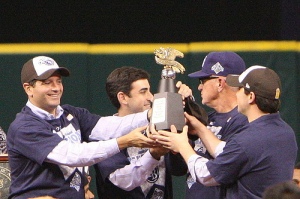 What would be more of a challenge than to resurrect a team that has not won a World Series in a Century. Take a team steeped in such deep tradition and in-bred into the town’s psyche and provide a vibe, a final piece of the puzzle to finally eliminate that faithful Cub phrase, “Maybe next year”.

But do not fret Rays Republic, Friedman is only being mesmerized by the snake charmer. There is no apparent movement of feet or mind to the Chi-town skyline, but it will happen. The city will open itself to Friedman, throw on it’s Sunday best to try and persuade the Rays boy genius to take up stakes and move to this vista.

But even as the traditions and advantages of a Chicago move are flowing in his mind as soul, Friedman also knows he has a little unfinished business back here in Tampa Bay. You know he wants to be a part of the legacy of this franchise. His footprints already dot the landscape, but there is one prize still missing.

It is not a stadium deal, or even a full stadium for 25 % of the home games, it is hoisting that last trophy into the air with a franchise he helped get off life support and finally get to the threshold of that dream. Friedman has done so much here that possibly he could realistically say he has done is job and ready to move on to another project.

Many here in Tampa Bay know that one day this scenario will play out, that Friedman will leave, retire or find a new rebuilding project that he finds intriguing. But if it did materialize that Friedman is to pick up stakes and take his show on the road to Chicago, you know he will leave with a bang, possibly in one of those trademark Friedman trades to the Cubs. Hey Friedman has done more in the past with far less…It could happen.