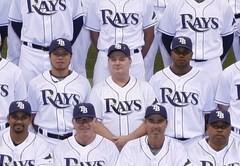 I wonder if I printed all 1,200  of my posts that I have submitted since the beginning (September 7, 2007) end to end if they would reach the cupola atop Tropicana Field? Probably not, but I wonder if I stacked them horizontally would they fill the Progress Energy mosaic walkway that stretches just beyond the security gates outside the Trop’s rotunda as it meanders towards the 3rd Avenue South parking lot entrance. 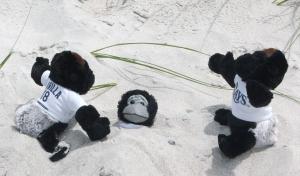 1,200 doesn’t seem like such a huge number until you add in a few facts and figures, then it shows its magnitude. To reach $1,200, a Floridian making minimum wage (7.67/Hr) would have to work almost 156.45 hours to hit the amount. That was the total price of my Tampa Bay Rays Season Ticket for a Lower Box Seat in Section 138 in 2006. I could purchase 150 $8 beers in the stands at the Trop, possibly enough for everyone in Section 138 to chant my blog name in unison, but I digress.

It still is mind-boggling to me I have written so much is such a short period of time, but I love to write, and especially about my favorite hometown team. You can truly call it a ‘labor of love”, because there is no other team I follow as close any more, or with such blind abandon than my Rays. And my muses during those 1,200 posts have rum the gambit from the dropping of the “devil” in the team’s name, to the hope that 2012 is going to be the “Year of the Stadium” for the Tampa Bay community. 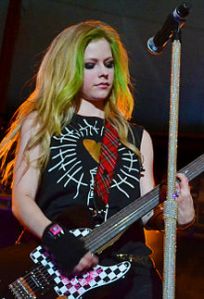 I have gathered together my second passion, photography and tried to bring you unique one-of-a-kind photos from my times at the Trop, or down in the photographer’s pit during the Rays concert series over the past few years. From Adam Lambert to ZZ Top I have tried to bring you a little bit closer and a little bit more informed on things around the Rays Republic. Given the causal Rays fan access into the post season celebrations, some planned 2008 celebratory cocktails, and a visual and written access to special events and one of a kind charity happens in and around the Tampa Bay region. 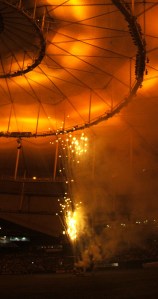 I have also taken you on a journey as to the drugs in our own bathroom cabinet that could produce a positive MLB drug test, did a series on the maple bats and a few inventions in the darkened hallways that could replace this splintering menace if MLB approved them. Gave you my opinion more than once on the Rays stadium situation, and even a site that I still feel strongly fits all the criteria of both the Rays and the City of St. Petersburg. Brought you photos and commentary from Port Charlotte since 2010 on the first day of workouts, plus events like the indoors fireworks display or the Sunday magic of Raymond and his miniature Rays-ettes.

I still remember hitting the Lastest Leaders list for the first time a little over a season after posting my first blog post. September 12, 2008 is a special day to me because it was the first time I cracked the Top 20 blogs on our site sitting right in the middle at # 18. Nowadays I tend to sit in the top-tier, even finishing 2011 as the 2nd most page views for a Fan Blog on MLBlogs.com. I know there are websites who hits these numbers daily, but since we made our switch to WordPress( mid-May 2011), a total of 271,642 of you have clicked on my posts. 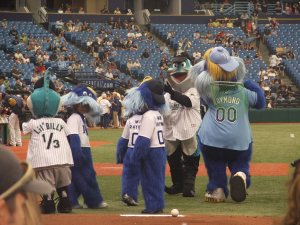 I love writing here, and it has been you, the MLBlogs.com family and people outside this blogging community who have built up my writing confidence, stamina and determination to keep thrusting out posts both during the season, and in baseball’s down time. People always ask me what my favorite post is, and my true answer is all of them. Each has a little bit about me you never knew, or a Rays fact that has escaped most people’s eyes.

I yearned early on in life to be a journalist, and let my creative side of go “idle” after leaving the Sports Department of the defunct Evening Independent and began my post-sports life. I wrote both in High School and college about sports, but something was missing. It all didn’t click again for me until back in 1996 when I first plucked down $20 for a Season Ticket seat deposit. I can truly say the Rays are the reason for me to again write, amuse and hopefully entertain you about the ways and means of the Rays Republic. 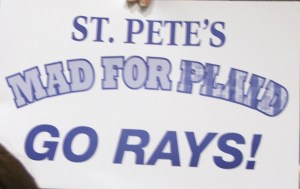 But in the end if it wasn’t for you reading my posts, commenting or even talking to me in the Trop stands, this adventure would have been scrapped long ago. I do not write for money, fame or even special treatment, I write to hopefully make one more person want to follow, attend games, to buy a Rays item for themselves. I hope it doesn’t take another 52 months to hit my 2,400th blog post, but then again, it seems like just yesterday I was talking about “D No Longer Stands For DevilRays”. Want to know something really ironic, that  first post was 860 words, same as this one today.

Congrats on the milestone!!! MLBlogs fans and your fellow bloggers sure do appreciate all you’ve done. Your Avril photo will always be my favorite, though…Thanks again.
–Mike
‘Minoring In Baseball’

Mike,
Thanks for that compliment. Avril was a great concert. Even though there was a vocal hiccup, I was fully entertained and enjoyed the performance she put on us that night. I actually think she held back a few words, because I know I might have let off a few more blue words not suitable for young folks. It has been a fun journey, and one I do not regret at all, even in the times when writer’s block invaded the brain.

I always enjoyed your blog Cliff. It is amazing brotha how the years have just flown by yet we still keep cranking stuff out. I still have the passion for my blog that I did when I started and you do as well if not more so. We both trendsetters cause we don’t follow anyone. Good luck bumping either of us out of the top 10, we work too hard…Have a great season…”D”.

D,
You know I always got your back brother. Some day the writing will stop, and possibly it will be for other ventures, but I hope I can always pop up a link and check out another blog that I have always respected, loved and get a chuckle out of all the time. Just for you, I will do a “Tebow” at Home Plate during Fan Fest.
Still got to some day take a jet to D-town and check out the Rockpile with you.

RAYS RENEGADE-You travel to Denver for a visit we’ll do ya better than a Rockpile seat. Send me the Tebow pic brotha..I’d love to post it on the Rant…”D”

D,
It might be some time, but Coors Field is on my Stadium Bucket List. Almost got there the last time the Rays played in Denver, but life happened. All I know is you are not getting me to try Rocky Mtn Oysters (lol).