If the recent Tampa Bay Rays Team Spring photos is any indication, I am starting to think the Tampa Bay Rays 2012 season is going to be more back to the basic, nothing flashy or disrupting to the status quo of the “Rays Way”. Maybe I was anticipating a re-visit or renewal of the grandeur and glamor of the Rays 2010 Spring Team photos that took my breath away, and made you wanted to see more of them. 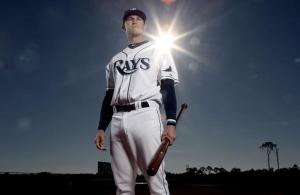 If the 2012 Team Spring photos are any indication, this season is going to be a bare bones, nose to the grindstone, no huge frills and spills kind of season…not that this is a bad thing, maybe I set my expectations too high this season. But then again, it is Spring and hope has to grow eternal and unbridled.

Sure the 41 photos recently uploaded to the Zimbio webpage by photographer Jonathan Ferrey had some unusual and classic poses within their compositions, but somehow a large glove-full of the Rays possible 2012 roster personnel missed their camera time with the Zimbio photog. At least we know Rays 3B Evan Longoria got a few extra shots. Maybe dating a Playmate does have some photo advantages, but a total of 13 individual photos? Longo is one of the cornerstones of this team’s offensive and defensive foundations, but so many other cogs of the machine are missing, lost their possible chance in this annual Rays ritual of Spring.

Sure C Mark Thomas and OF Jeff Salazar who are both Rays Spring Training invitees got their respective mugs/poses on a photo, but missing were a huge slice of the Rays other core players like starter Wade Davis, Rays Bullpen members JP Howell, Brandon Gomes, Joel Peralta, Jake McGee, and newcomers Burke Badenhop and Josh Lueke.  Is it even imaginable that each and every one of these players somehow missed the vocal call for photos? Am I the only one who feels it is purely insane that 2011 American League Rookie of the Year Jeremy Hellickson would have, could have somehow missed his 2012 photo chance, or was it a captive selection of players designated by the Zimbio photographer?

I have not even begun to scratch the surface of the possible MLB bolo report put out since the “Legend” Sam Fuld, infielders Jeff Keppinger, Ben Zobrist, and Eliot Johnson must have mis-placed their “memos” possibly on their photo chance. Even more disappointing is that Carlos Pena somehow missed the photo cut…Really?

Want another firm kick in the proverbial teeth, the only catcher featured in the photo shoot was Jose Molina, and that was only for 1 photo. Heck even Reid Brignac got more photos than Molina, and he is not guaranteed a starting slot. I know there is a growing army of female Rays followers who would love to see a recent photo of Robinson “Honey Nut” Chirinos or even Jose Lobaton, but they will have to drive to the Charlotte Sports Park and take their own this Spring.

Maybe I got used to the flash and glamor set forth by those 2010 photos that had every single member of the Rays squad, including the Coaching staff in some sort of pose or hitting posture with the added sun flare somewhere within the photo framing. Maybe I was expecting something grand, a statement by the Rays this season as they start their 15th season.

But there were some positives in this set of photos of the 2012 Rays. We got to actually see what top Rays prospect Hak-Ju Lee will look like in a Rays uniform. We already know Lee can dance, and his bat has some magic in it, but seeing him in the Rays whites definitely makes you eager and hoping for the Rays future shortstop to make some additional magic happen during his minor league season so we can see him in that uniform possibly in September.

Maybe I am nitpicking here a bit, but I have come to expect more, especially after that grand and fabulous 2009 Spring photo package. Heck, even Rays skipper Joe Maddon had a possible glamor shot in 2009 that to this day might be one of the best photos of the Rays newly extended Manager.

I possibly wanted something again to “pop” off the screen of my computer, wished for another set of dynamic photos taken that would get my blood pumping, the sweat beading around my cap and the Rays Republic making photo copies of the team photos for signatures in the future. Not sure if any of these Rays Spring photos will be seen on the sidelines before games in 2012. Certainly doubt it (shudder).