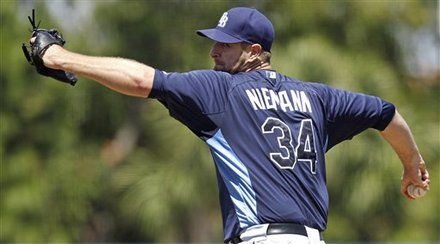 So the Tampa Bay Rays are going to draw this drama out for one more day. Seems kind of silly since we basically know that barring a possible trade, the team will probably hoist the “Tall Texan” Jeff Niemann as their fifth starter for the regular season. His main opponent, Wade Davis has basically conceded the decision after a bad outing in his last Spring start. With Davis’s comments after his start on Sunday, you would have thought the decision was already made and he was eager to hit the Bullpen and come out swinging this season in the latter innings.

But do not think a little competitive edge did not favor Niemann since he has clearly been in this position before and has played his part staying consistent on the mound this Spring, trying to provide ammunition for name being selected for the last rotation spot. It was only a few seasons ago Niemann and Jason Hammel were in different minor league games that were to decide the fifth spot, but Hammel ended up being traded to the Colorado Rockies at the conclusion of that day’s activities, which made that Springs decision moot.

In all honesty, Niemann has done nothing this Spring to fall from grace with the Rays staff. Even his refusal of a small raise and going to salary arbitration over a measly $500,000 ( he lost) was viewed as a “business decision” and the Rays front office holds no animosity towards his Winter decision. In hindsight, the fact Niemann had the confidence and internal constitution to stand up to the Rays in arbitration. Some say arrogance can be the best gift for a pitcher.

In Niemann’s corner is the fact he has posted 3 straight 10+ wins seasons as a starter. Only former Ray Scott Kazmir can say the same. How soon we all forget Niemann started 2011 0-3 in 4 starts before he went 11-4 in 19 starts the rest of the season.  Add onto this the fact Niemann has been an amazing “road warrior” for the Rays holding a .700 winning percentage (21-9) over the last 3 years, which is second best in the majors. Suddenly you see a big hidden part of Niemann’s success for the Rays.

But could Niemann or Davis be headed elsewhere, and the current decision is being withheld as the Rays take a last chance last-minute offering for someone currently “out of country”. It is pretty common knowledge by now that the Rays covet Oakland A’s catcher Kurt Suzuki as a great addition to their backstop corp and want to bring him into their fold. Problem is, neither Niemann nor Davis really whets A’s GM Billy Beane’s whistle, but with a delayed announcement and the Athletics playing over the International Dateline in Japan, maybe the time difference is Rays Executive VP of Baseball Ops Andrew Friedman’s last grasp to try to land Suzuki.

Add into the equation that fact that Rays Manager Joe Maddon has set a few parameters as to who would get the “ 5th gig”, and with Davis’s ERA sitting at an uncomfortable 4.91, barring a trade or possibly Niemann getting knocked out by a crossbeam in the Rays Clubhouse, the decision seems a bit moot.

One of Maddon’s prerequisites was “ who can help us win game early on in the season”. Not sure if either of the two pitchers have distanced themselves in this category, but if you take into consideration Maddon second criteria of “ who can be effective in the Bullpen”, then Niemann is the guy who will inherit the 5th slot. If Niemann had great reliever qualities, he would have at least had a reserved seat in the Bullpen in October, but he was not even on the Rays post season roster.

Not knocking Niemann as a reliever, but the guy tends to need more time to warm-up, and as a reliever, your time is extremely limited. Add onto that the fact Davis has already commented he would go to the Bullpen and “kick butt”. Even based on that kind of comment by Davis, you get the honest feeling that the decision has already been made in at least one player’s mind.

Maybe this is a blessing in disguise for Davis who sometimes tends to hide some of his velocity on the hill, keeping it in reserve if needed. In the Bullpen, he can let it rain strikes and bring it full-bore and I bet Niemann will be the first guy to greet him on the dugout steps.

Some will say Niemann is the more polished of the two, but he has also shown a quality of getting fatigued and injured at the most important moments over the last few seasons. Still, Niemann boasts a .639 winning percentage over the last 3 MLB seasons (min 75 starts), and that is currently 8th best in the majors and  is 27 points above Rays southpaw David Price (.612 percent). That is a considerably nice “stat” egg to have in your basket when consistency and winning are huge factors in this decision.

It was really Niemann’s position to lose this Spring. Barring an injury over the last few games or a trade out of leftfield, he owns the 5th slot in the Rays rotation. The deeper you look into consecutive good outings and subsequential winning streaks, Niemann stands head and shoulders above Davis for that last rotation spot. But then again, there are not many who stand taller on the hill than the Texan.