Will the Rays End Their May 14th Curse?

Ohhhhh, I truly hate this date. Some have called me obsessed, pretty much bordering on insanity when it comes to the Tampa Bay Rays and their games on the date of May 14th. I have scheduled impromptu flights at midnight, fought with TSA and customs officials, and even caught a walk-off Home Run as the Rays Republic sat in awe at home in an extra inning contest. This date holds darkness for me, and I want the Rays star burst to finally shed to some victory light on this day.

It is one of those days I always wished the Tampa Bay Rays would win a game, but in 12 previous contests on this date in their existence, failure has greeted them in the end. I have Tweeted about it, screamed to the high heavens, wrote about each of these past contest in posts, but still the smell of victory has eluded the Rays on May 14th. I have have done all I can as a fan to wish, pray and make a win materialize, but it always has ended up the same…an “L” in the box score.

Even one of the Rays media hounds post about the Rays 0-12 mark on this date in the past, but did he actually know the Rays have been outscored 83-42 on this date? I think not. I wonder if this media guru did any additional background work and found out that in 1998 Russ Springer was the first Rays hurler to throw on this date, with Wade Davis, who is now in the Rays Bullpen, throwing the last 2 losses. Wonder if this same media figurehead knew that during the Rays 12-game losing streak on this date, 6 of those contests have been 1-run losses. 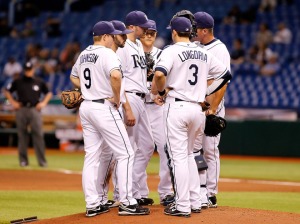 Some might say the Rays inaugural season (1998) 2-10 loss in Kansas City against the Royals or possibly their 2002 3-10 drumming in NYC by the Yankees might be their worst faring on this day, but I disagree totally. To me the worst showing on May 14th came just last season when the Rays got shut out at home by the Baltimore Orioles 6-0 and fell to 23-16 on the season.

How could you have imagined a loss on this date when we even had a pitcher who threw 2 No-Hitter’s throwing on this date (Hideo Nomo), plus a clutch hurler known for his Big Game prowess threw twice on this date(James Shields ) and a future Rays sweat-inducing closer (Esteban Yan) could not help this team muster a win. From Springer to Davis, the Rays have turned to 10 different pitchers and still we have been winless on this date.

I have attended all 12 of those losses, but I will not be in Toronto tonight for the lucky 13th try at victory on this date. I was in the stands in Kauffman Stadium for their first May 14th loss, and even caught the Casey Blake Home Run ball in their 10th inning Walk-Off loss back in 2004. It was a sick feeling watching former Rays closer Lance Carter peer up at me as I clutched that ball, but it was hit straight at me on a line…an unfortunate present for the day. Some say I should have dropped the ball, but it seemed like a destined shot, and fulfilled a nice deletion from my baseball Bucket List.

Even the promise of a former Rays First Round Draft pick named Dewon Brazleton could not muster a win on this date, but he did come close as the Rays only lost by a solo run to the Toronto Blue Jays (7-6). And it is a bit ironic the Rays take on these same Jays today. Especially since they hold a 3-0 record against the Rays on this date, it would be extra special for the team to finally put an end to this streak in Canada.

Springer, Kevin Witt, Yan, Travis Harper, Brazelton, Paul Abbott, Nomo, Casey Fossum, Shields and Davis have all gone to the hill wanting victory, but have seen the game’s gasp go to the opposition. I hope on this 13th try, when I will not be in attendance for the first time on this date….a win finally comes to this team. It would be a glorious present, and one I would cherish always. Who doesn’t want a win posted on their special day.