First Half in the Books, Can’t Wait for Friday

Been a rough first half for the Tampa Bay Rays. Some things have gone as planned, while others have seemed to be spontaneous adjustments and hunches that either worked brilliantly or destined to be talked about, and dissected over and over again by the Rays faithful. Not once this season did Rays Manager Joe Maddon get to post the nine names he wanted on his line-up card together, the 9 names that he felt would make a difference, would bring him a consistent key to victory. 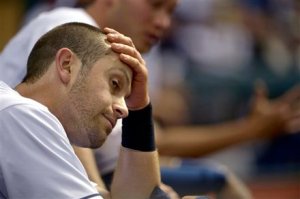 Not one line-up card in the first half carried all 9 of the Rays best players. That in itself proves something to me.  It also tells  a tale of how hard these first 86 games has been for the Rays coaching staff and Maddon to nightly present a consistent line-up card.  How frustrating  it must have been for Maddon over these first few months to consult his Medical staff before penciling in someone with clarity.  From B J Upton’s early season absence to Evan Longoria’s delayed return ( maybe mid-August), this team has been  a mire shadow of their 2011 selves.

But with this All Star break comes a mini diversion of their 162 strife with a few days of life away from the ballpark to not only catch their breaths, but recharge and re-focus heading into their final 76 contests, I’m expecting to see some nervous energy and renewed excitement  bouncing from the roof catwalks to the outfield walls when the team again straps on their uniforms this Thursday in preparation of their second half kick-off against divisional rivals Boston.

Odd how that old Maddon mantra of “Fortune Favors the Bold” will again be in play this Friday as divisional rival Boston brings their bats and fans into the Trop. for a weekend shindig. Bold moves have been made all year-long with positional players doing a merry-go-round of nightly choices, with a few of them meriting longer looks and prolonged involvement for players who might not have made this squad if all were healthy. Still the seamstress known as Maddon has stitched some amazing embroidery so far this season with his patchwork quilt of players from Brandon Allen to Will Rhymes.

Got to hand it to the Rays skipper for keeping the positive front, going with his gut instincts and proving again and again sometimes stats do not lie about players and situations.  Only problem is Maddon will have to dig a little deeper over this final stretch, to find the pieces of the puzzle that fit each and every situation. Maddon has always preached the gospel of “Pitching sets the tone”, and it does, but when bats go silent or swing at dead air, even a brilliant pitching performance or quality start can be lost in the nightly box score. Maddon might have to listen closer to the Zim bear as he whispers into the Rays skipper’s ear.  Seize the day has to be paramount with  a hard-nosed defense again becoming the focal point of this club.

Might be kind of ironic that the group Train will perform on the Rays first night of their 10-game home festivities to begin their quest for another champagne soaked clubhouse and game dates in October. I got a nice vibe of reassurance from this squad in their final game in Cleveland on Sunday, that with all the strife, humbling injuries and peculiar results this team has had to endure over their first 86 games , the simple prospect of this team sitting just 1 game out of the American League Wild Card race is amazing.

I believe it was less than a month ago that the entire AL East was so jammed and reaching for the top spot you had to check the standing nightly to see who might be top dog.  This division currently has their entire corp of contenders at or above the .500 mark and are bunched within single digits from the top-tier to the cellar. Toronto and Boston currently are 9.5 games out of the top spot, but that could change as quickly as a 3-game win or losing streak by anyone in front of them. To put this into deeper prospective, if the Rays were to get swept in their upcoming series against Boston ( not going to happen), the Red Sox would not only jump over the Rays into third place, it could just as easily push the Rays from eyesight of the New York Yankees into the cellar.

Even with the Rays currently sporting a 45-41 record, ESPN has the Rays enthusiastically sporting a 26.8 % chance of again spilling champagne in late September.  For that to materialize, this squad has to re-mold itself into a more consistent fighting machine both on the field, and especially at the plate. Signs have been surfacing lately with Ben Zobrist rising his average up more than 50 points, Luke Scott finally getting the woodpeckers out of his bat bin, and Elliot Johnson no longer being the “secret weapon” no one knows about. Just a little more out of each of the Rays 25, and this club could be on track to again move onward and upward.

I know this Rays squad has it in them, we all saw it in their  early Walk-off victories that somehow got lost in all the clouds of frustrations both on the hill and at the plate.  When the Rays again get a few cogs of their offense back from their  injury hiatus, pieces of the overall Rays puzzle will click back in place. Matt Joyce is days away, Evan Longoria could be back by mid August, starter Jeff Niemann should begin some level of baseball activities soon, possibly being back before the roster expand in September.  This team realistically has their old magic just out of their reach right now, but it could be back sooner than we all imagine.  For now, patience is not only a virtue for this team, it is a necessity.