Loney Could be the Rays 2013 Hidden Gem 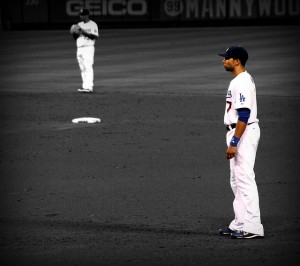 I am hearing some pretty sweet music from friends who follow the Los Angeles Dodgers on the Tampa Bay Rays recent signing of veteran James Loney. Some have proclaimed Loney a shining MLB gem that gathered some unusual dust, rust and lost a bit of his luster in 2012, but easily could easily show up to Port Charlotte, Florida this February polished, glimmering and shining like a diamond in the rough for the Rays.

Immediately some will see the signing of Loney as a logistical offensive and defensive addition in the ever-changing Rays roster fabric. I mean the guy has maintained a career .282 average and is just 105 hits from the “1,000 hit” plateau, but this signing has as much to do with on-the-field Rays movements as it does up the tunnel and behind those double clubhouse white doors. Loney is a leader, and that should take some of the command burden off the shoulders of Evan Longoria, James Shields and David Price. I am one of those who firmly believes you can never have too many positive vibes flowing in a clubhouse

We all know without reservation that Loney brings with him a nifty glove (career .944 Fielding Percentage), an immediate improvement to the Rays anemic offense situation (108 hits in 2013 between Boston and LA), but his energetic aura will help most in filling the void left when certain members did not return to the Rays. With Carlos Pena and B J Upton gone, the team had a void in their team leadership, and Loney definitely fills that void to overflowing. I some might forget with all the changes over the last few years with Dodger personnel, Loney has appeared in 752 games since 2008 for the Dodgers which would in retrospect rank Loney in a solid 4th place All-Time for the Rays with Carl Crawford (1,235), BJ Upton (966)and Aubrey Huff (799).

Loney does come into St. Petersburg with a lifetime batting average of .282, there is hesitation for me to strike up the bandwagon and greet him with open arms. Some will say Loney might finally be feeling his MLB age as he saw his batting average free fall from healthy .288 in 2011 with some power (12 HR) to an All-Time low in 2012 of .254 in 114 games with the Dodgers before his trade to the Boston Red Sox where Loney produced a .230 average with 2 HR and 8 RBI in the season’s final 30 games. Still, that average is way superior of Carlos Pena’s .197 batting average in 2012.

We have to remember the Rays did not sign the 2008-2010 version of Loney who averaged almost 90 RBI and 12 HR during that trifecta of seasons, this is an aging veteran who has the ability to make this team more cohesive and not be a negative addition to their roster. Loney never developed that huge power stroke most people forecasted in his early seasons, and in Tropicana Field he does find a friendly 322 foot mark down the Right field line that might spark a few extra HRs in 2013. 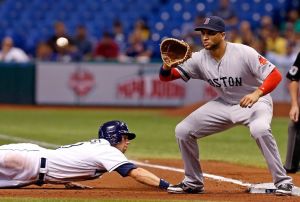 Hidden deep below those compelling anemic 2012 stats is a few speckles of a glimmering gem that could help the Rays a lot in 2013. Loney hit for a .294/.351/.441 line against right-handed pitching while also grading out as one of MLB’s best defenders at first base over the last 3 seasons. Considering the Rays signed Loney to a 1-year $2 million dollar deal with a chance to amass another $1 million in incentive bonuses, the deal is not a financial killer to the Rays if Loney doesn’t become the needed weapon for the team.

Sometimes MLB players have a “glitch” season during their MLB journey. Let’s hope 2012 was Loney’s only venture away from his usual productive bat and he again proves to have a vacuum cleaner glove down the Rays First Baseline. If Loney does find some of his past luster, the $3 million dollars the Rays invested into Loney could possibly once again produce a “Comeback Player of the Year”, and a few games more into the post season fun. Glimmer on Loney, Glimmer on!

I was a big James Loney fan while he was with the Dodgers. I think he is going to be an example of a player that just needed a change. He is never going to be a big power guy but you can expect Mark Grace like numbers which is not bad for $2MM.

Don’t be surprised if he has a break out year and maybe even a run at the batting title.

Doubleablues,
So many people have labeled Loney after his weird car accident as a bit of an eccentric, but I think that story has more chapters and corners than the media and Loney let us know about publicly. I believe in chances, sometimes 2 0r possibly 3 before you even think of the exit dorr for a player. Careers are short enough in this sport that if the abilities and the personality of a player do not suit the team’s direction, he will be cut out of the picture and sent packing.
I agree with you that he could have a awesome first half as the AL pitching staffs try and find adequate ways to keep his bat silent, but his solid defense might keep him on this team for the long term. Carlos Pena and Casey Kotchman both saw a bit of a rebirth in this hamlet, maybe Loney is the next Comeback chapter based in the Rays jersey.