The minute I heard about the fact that Tampa Bay born Sweetbay Supermarkets were trimming their store chain by 33 locations within Tampa Bay I wondered immediately how the consolidation would affect their strong partnership with the Tampa Bay Rays? Sure the chain will still have over 72 store in Florida, but slicing the region of 33 locations definitely takes a huge chunk of both grocery sales and local “feel good” exposure for the grocery retailer.

With the grocery chains long history of support and sponsorship with the Rays, you have to now wonder with 33 of their Tampa Bay stores being vacated just about the time for the Rays pitchers and catchers reporting to Spring Training if the close and intimate relationship the Rays and the grocery chain had for so many Major League Baseball seasons might also becoming to a haste conclusion.

The chain became the first supermarket chain to join with the Rays back in September 2008 as the Rays were experiencing their “magical season of baseball”, when Sweetbay joined forces with the Rays by signing a multi-year partnership deal with the MLB franchise. From that moment on, the team and the grocery chain found interesting and unique ways to join bring the game of baseball into their stores.

With Sweetbay’s consolidation announcement there is a boatload of questions without plausible answers at this time as to the continuation of such Rays game day experiences as the Rays Bat Kid of the game who loud and proudly announced that classic phrase “Play Ball!” before every Rays home game over the last few seasons. Sure the co-sponsor of the event, Aquafina/Pepsi could take the reins and make a smooth transition, but the fact remains, Sweetbay had a deeper impact on our Rays experience than we all realize. 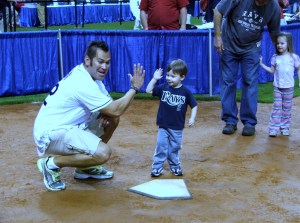 Could there be a naming change now for the former Sweetbay High-5 station manned by Rays players during the last 2 Rays Fan Fest where kids got to get a high-5 from Rays players and Coaches as they rounded Third and came into Home Plate. Most people might not remember, but Sweetbay was also one of the corporate sponsors of the Rays 2011 Fan Fest as well as hosting Rays players autograph signing within their stores.

Sweetbay also provided a unique experience back in 2011 season when they offered a unique Rays game day experience during a Matt Joyce autograph signing at their North Dale Marby location. Fans who donated a 4-pack of fruit cup to the Feeding America’s Kids Cafe within the store were then eligible for a drawing to get 4 Rays home game tickets, 4 batting practice field passes, and a Matt Joyce signed bat during that season. The Rays and Joyce also premiered a special edition Rays set of players card on that date with Joyce personally signing his card for all in attendance 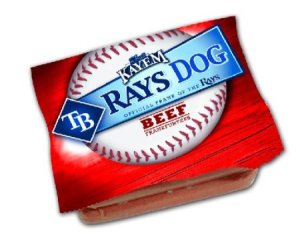 Sweetbay was also the first Tampa Bay area store to carry the same Kayem brand hot dogs sold during Rays home games at Tropicana field in their store locations throughout Tampa Bay to give fans a chance to also enjoy the same great hot dog taste while watching Rays away game broadcasts in the comfort of their own homes or backyards. And who could forget their annual $1,000 shopping spree with a Rays player in one of their locations where a Rays fan gets to go wild getting grocery carts filled within an allotted time with the help of Raymond and one of the Rays players.

Hopefully there is no huge effect of the relationship between the Rays and Sweetbay, but the reality is there will be less of a footprint in the region for the grocery chain and their long time partnership with the Rays could definitely be a victim in this change. It would be sad to see the chain take a step back and re-assess or remove themselves from the Rays fold.

It is a bit unsettling to see the chain who first brought their new name to our eyes in Largo, Florida in 2004, and is based in Tampa, Florida might be leaving our Rays game day experience. Together the Rays and Sweetbay chain made a great partnership with great game day and hit it out of the park regularly with their community events that not only sparked large crowds and a fond following, but showed that a sports franchise and a retailer could cross promote themselves with such class and grace.

But I guess sometimes change happens whether we want it to or not. Heck, where will Rays Manager Joe Maddon shop for his annual Thanks-Mas event if the stores near the Trop are shuttered up?

Sad to hear about the closures. I can only imgaine soon other grocers will come in and buy up the vacated locations. Wal mart express anyone? Their already building them here in Jacksonville. Go Rays!

Paul,
I can only imagine how fast and furious the ideas are flying in Arkansas right now as to if these would be Wal-Mart Neighborhood stores, or Express desired spots. I seriously thought Winn Dixie might be purged before Sweetbay made such a rapid swoop of closures. But Lakeland-based Publix does have the market share and with them taking over the old Albertsons locations about 4 years ago, have stepped up their footprint in the region.
Guess we shall see who and what might take the place of these 33 stores……Indoor Soccer?