Fondly Remembering my Encounters with Musial and Weaver

I am truly saddened by the passing of two Major League Baseball icons who had ties to the Tampa Bay and in particular, the St. Petersburg, Florida community. Both spent several Spring Trainings in this area, and both proudly wore their team’s bird upon their chest. I did have the pleasure of meeting both Stan Musial and Earl Weaver during the time the St. Louis Cardinals and Baltimore Orioles shared the St. Pete sunshine. I remember each for different reasons, but always cherished them as true baseball icons.

Musial was a frequent visitor to my father’s Pure Oil/Union 76 gas station during the 1970’s gas war days. I was the young kid who came out and pulled the cones for residents and ball players alike to come fill their tanks and get a windshield wash, tires and fluids checked and even bits of conversation about anything and everything under the bright Florida sky. Musial actually asked about getting a LOF (Lube, Oil and Filter) and was surprised to see a pint-sized junior mechanic under the grease rack doing the duties. He walked into the service bay and chatted with me about my love of baseball, offered to leave tickets for myself and my Dad, and even asked how my Little League season was unfolding.

I found him to be a unique and soft-spoken man who got the privilege of playing baseball for a living for so long and made it to the top-tier of his profession. Musial came in a few more times that Spring, and we seemed to begin our conversations right where we left off, and I did go to a n umber of games where Musial tipped his cap to my Dad and myself and I even got to hold his bat once while he was signing autographs for other along the dugout fence.

The worst part of all of this is that Musial was no longer a player at this time, and his time was spent sitting in the dugout, walking down the Al Lang Field fencing signing balls, photos and conversing with the fans before he made his way into the Clubhouse and disrobed and became one of us mingling near the Press box and wandering stadium with just a slight hint of invisibility. If I saw him under the stands I always came up to him, offered conversation and wanted him to know how much I respected him as a ballplayer and a man. St. Louis eventually decided to not come to St. Pete anymore for their Spring Training, and with it my special moments with Musial ceased. I have always wanted to hit the new and expansive Busch Stadium and hoped to catch a glimpse of the man I truly felt was not only “Mr Cardinal”, but one of my first baseball buddies.

Before the Tampa Bay Rays were even a whisper on my lips, the Baltimore Orioles were my team of choice when it came to baseball. This was even before the Orioles decided to make St. Petersburg their Spring Training home for several seasons before they migrated elsewhere, never to return to this vista. I was a young ballplayer in the late 60’s, just beginning my on-field love of the game and enjoyed any moment I had down at the complex watching the likes of Boog Powell, John Lowenstein, Paul Blair and my favorite Brooks Robinson stride into the batters box or take their position on the field.

My introduction to O’s Manager Earl Weaver came bay accident, and in the most embarrassing situation. I was one of those kids who felt like an adult and wandered away from my parents a lot in my younger years. On this day I somehow got behind the security line of defense and wandered into the Orioles Clubhouse looking for the bathroom. If you have every seen the older style bathrooms of that era, there would be a massive trough or stalls lining one side of the room and what seemed like a mile of sinks and products lined along mirrors that seemed to go on forever.

I was startled by the flushing sound behind me and even more startled when Weaver came out of the stall grumbling and throwing a few unknown words to the heavens. I think we both took a step back when we face each other, him in shock of seeing a young kid in his Clubhouse and myself seeing someone I respected and admired for his style of baseball. 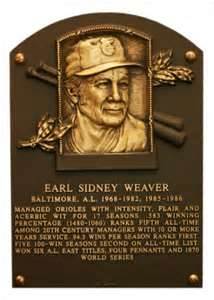 I extended my hand and introduced myself and Weaver just chuckled and called for the Clubhouse attendant. I was not sure if I was in trouble and should run, or take the penalty for my mis-guided adventure into an authorized area. Weaver instead asked the “clubbie” to get me an official Orioles cap and asked if I was having a great time. I shuddered a bit wondering why this legend wanted to know anything from me, but as we both walked out of the bathroom area the clubbie popped a cap on my head and we both walked out the green double doors towards the 4 fields on the North-side of the complex.

My Dad saw me walk out with Weaver and you could see on his face I had done another of my many lifetime “Dennis the Menace” moments. I kind of shadowed Weaver a bit that day while I was at the ballpark complex, standing behind the fencing near him hearing his sage wisdom and advice to both players and fans alike. He was a grizzled baseball veteran, but also showed a heart of gold this day, even to a young fan like myself. I stayed at the complex until the players began to again head for the Clubhouse and leave for the day.

Weaver saw me tired and a bit sunburned from the day and tipped his cap as he also ventured into the coll air of the clubhouse for meetings and a bit of lunch. People talk about the harsh nature of Weaver, for his gruff commentary and demeanor, but on that given day, none of that came to the surface or showed its face to me or the assembled Spring crowd. Over that Spring I ventured down to the complex and to games as much as I could either in attendance of my parents, or by a lone bike trek to the St. Petersburg waterfront. Each time I scampered down to the fencing by the dugout with my O’s cap on my head hoping to get a pre-game cap nod from the O’s skipper.

Both these men made huge impression on me at a young age about the game of baseball and I think each helped sow even more seeds that flowered into my undying love for this game. I had not seen or talked to either of these great baseball icons for many years, talking to both at charity events in the Tampa Bay area. It is always a somber event when you hear of one of your respected heroes and role models leaving this Earth. But I know if there is truly a place above the cloud where we ascend to, Weaver is growling with the Umpires and Stan the Man is young again and patrolling the outfield with passion and joy. Musial and Weaver are in the Baseball Hall of Fame, but they also share a special place in my baseball heart…forever.

Well said, sir. From one Stan the Man fan to another.
Mark/MLB.com
http://mlblogs.mlblogs.com

Mark,
It i wild sometimes how guys that that stature sometimes come into your lives even for a small segment of time and you hold it so close to your vest as moments of brushing greatness. Been truly honored to have met so many great people in my life and even had a few casual conversations that stay so bright and present in my mind. I know I will meet more, and with it more memories of great men and their actions. I wish everyone could brush against time like this and cherish those moments.