Is Peninsula Bound St. Petersburg Getting a Raw Rays Deal?

I am one of those people who just sit there and shakes my head when Major League Baseball or one of the Tampa Bay Rays front office head honchos talk about the fan base within 30 miles of their current home in the downtown section of St. Petersburg, Florida. I understand the logic that Rays Senior Vice President of Development and Business Affairs was trying to convey that only “600,000 people live within a 30-minute drive of the Trop”. But you have to remember the founding Fathers of Rays baseball knew the Trop would be surrounded by water on 3-sides and still they built it because they believed “If you build it, they (baseball) would come”.

It is quite understandable that the consolidated population number quoted by Kalt would be low considering to the West of St. Petersburg there is about 7-8 miles of fans before you hit the Gulf of Mexico. To the South of the Trop’s current location there are some 7 miles of fans then you splash into the estuary that is Tampa Bay or travel over the Sunshine Skyway Bridge to a small segment of people in the Palmetto and Ellenton. If Rays SP David Price threw a stone due East he would hit about 2 miles of potential or actual fans, then his rock would hit only water until you venture over to the other side of Tampa Bay towards Apollo Beach and possibly a few dozen faithful Rays manatees by the TECO power plant.

If you journeyed North from Tropicana Field you would get the second biggest segment of the fan base within that 30-minute trek as Pinellas County forms a bit of a lower case “b” from the St. Petersburg area and narrows considerably until you get up in the Palm Harbor and Oldsmar areas which then you can travel eastbound on solid soil. If you travels Northeast over either the Gandy or Howard Franklin Bridges you get a minority of the fan base population not situated in the heart of St. Petersburg with the 30-minute window and on a good driving day might find that 30-minute stopping point about halfway through Tampa possibly basically near 50th Street just a short tad short of historic Ybor City. 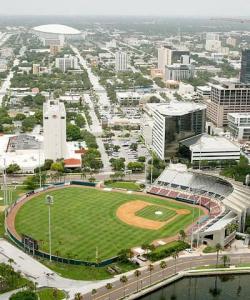 Kalt is right that St. Petersburg and the lower half of Pinellas County are cut off a bit from the population core that has sprung up over the last 10 years venturing North, East and South of the metro Tampa area. With water on our 3-sides it makes sense we might not have the fan base of some Triple-A teams. I would love to have the luck of landlocked cities like Atlanta and Cincinnati who have their Triple-A squads within a car ride away from the MLB Clubhouse, plus do not have a water trap like we do here in St. Petersburg to act as a deterrent to some fans beyond the 30-minute drive window.

I understand totally the logic and slanted numbers here that show that the current Trop location doesn’t have the ample 30-minute availability of some more centrally located areas in the Tampa Bay region. But I wonder if anyone has done any research to see if the numbers show a more positive swing if the stadium was situated in the Carillion Park region of Pinellas, or if the numbers are staggering to show a Tampa slant, possibly more in the Dale Mabry/Raymond James Stadium region than in the Tampa Channelside or downtown region. Of course the farther you go East, the higher the population base would be as you are going farther away from the St. Petersburg situation of water on 3-side and venture into other cities like Brandon, Seffner, Plant City and maybe a sliver of Lakeland, Florida.

Bashing the Trop’s current location is the modus operandi of Major League Baseball and the Rays right now because it shows a negative population impact compared to some other areas within the land-based regions of Tampa. It bothers me when numbers that are slanted and made to swerve left and right into the plans of the Rays and other factions. St. Petersburg and its citizens do not deserve the negativity. I understand the numbers, concur with the Rays logic, but if the stadium had been placed in mid-Pinellas where a majority of us Rays Republic fans had hoped back in the 1980’s, this mumbo-jumbo of stats would not be thrown into the ring at all.

Some times people forget this region was so baseball hungry back in the 80’s, way before the Rays expansion team was awarded we built a stadium hoping baseball would come. Tried to buy,relocate and even got stonewalled by MLB before we got our team via expansion. Sure the old St. Pete Gas Plant location might not have been the most feasible location even back in the 1980’s, but the site was decided by some people who felt it was a centrally located area at that time. It is a foregone conclusion baseball has a limited shelf life in the confines of Tropicana Field, but to downgrade a region that can not expand horizontally because of H2O to me is just wrong. The reality of it all is the initial site that became the Trop was the wrong spot and that was decided way before the building was rigged for baseball and was home to large concerts, huge Home Shows and even a high-caliber of NHL Hockey and Arena Football.

Sure Kalt is right about his numbers, but why should we give more ammo to the already negative outside National media to our stadium’s present location and attendance when even in its current Rays mindset of being an illogical location, it still has some of the best sight lines in baseball and is home to a high-octane MLB team.

The proposed new Rays home will logically be some distance from the Trop’s current location, but why throw so much negativity about the current stadium location when we all know deep down and in our hearts will be plucked from the St. Petersburg region. The first 15 years of this franchise has seen huge changes across the board, 2 championships, a Wild Card berth and 21,059,547 proud Rays fans have ventured through the rotunda at Tropicana Field the last 15 seasons most not afraid of a 30 minute drive to watch quality MLB baseball.

The sad part of the Trop location saga is the stadium is considerably more accessible that most people think. The problem is many people wait too long to make the drive. Instead of arriving 30 minutes or more before a first pitch they arrive as the game starts or innings later. I realilze work and other responsibilities conflict with planning a trip to the Trop, but waiting until the last minute to start a commute from outside the immediate St. Petersburg area will always make for a miserable experience, especially if the game of the day is a big draw. Moving the team to another location within the bay area will not correct this problem. If you want to attend a game there’s a way to avoid traffic congestion on most days. Plan to arrive early.

Part of the FL lifestyle is sometimes work and life get in the way of a good baseball game.
Worst part is anyone who has lived here for even a month knows the critical traffic times and should have a secondary drive pattern in their back pocket as well as any viable parking options.
But St. Petersburg has it better than some MLB towns, and that is just a plain fact. No matter where the stadium is finally located, a bridge will effect some part of the fan base and if they are prudent, not a single pitch will be missed.

The kids and I visited Turner Field in Atlanta in 1999. That stadium is literally inches away from I-75 and it took us forever to get in and out of the parking lot. We ran late and paid the price, but guess what? We learned from the experience and have put it to good use while heading to the Trop and other ballparks. We plan ahead and always leave early. We also have learned where the best places are to park and the quickest ways to exit after games. It’s a rare occasion that it takes us more than 5 minutes to find our way to I-275 after a game.

Auto,
I actually get to the area of the park 3-4 hours before the game to not only walk the stadium and see what it offers, but to talk to fans of that team and maybe try some of the local foods outside the stadium gates before hitting the park.
Pyramid Brewery in Seattle, Alice Coopers’ Coopertown in Cleveland and the list goes on and on. I have not paid a parking fee for the Trop for 9 years as I have found a spot about 1/4 mile away that offers free parking and a short walk to the Trop and places like Ferg’s for after game fun.
Every city has its own special and great ballpark surrounding place for pre- or post game fun with fans or for great dining options.
Looking forward to my first trek to LA in 2013 and having a Dodger Dog, meet some MLBlogs friends and maybe have a meal at a special Dodgers bistro. In other words, I make a day of my visits to new ballparks complete with photos and memories to cherish for the rest of my life.