Baseball defines itself by its unscripted single plays and moments that can easily decide victory or defeat. Where the crack of the bat meeting the ball can electrify a crowd, a defensive play that illustrates brilliance can boost your confidence for success, or a misplaced pitch left flat and lifeless can become a isolating factor in the contest.

These moments and more showed themselves vividly on Tuesday afternoon as the Tampa Bay Rays opened their 16th Major League baseball campaign against divisional rivals, the Baltimore Orioles. The Rays were riding a 2-game home opener winning streak and with a third win in a row could get Rays Manager Joe Maddon back to the .500 mark in his Rays tenure. Instead, the Rays showed us all the ways they have improved over the Winter, but also gave us a quick dose of reality that some things still need some fine tuning to succeed in 2013.

Rays ace David Price took the hill hoping to begin another trek towards a stellar season, but some crafty hitting and patience by the O’s hitters bore into the small holes of opportunity and had Price on the ropes early in this contest. Sure Oriole’s sluggers Adam Jones and Chris Davis had great starts to the 2013 season against Price, but C Matt Wieters seemed to be the biggest nemesis to Price on this day.

Not only did Wieters stake Baltimore to a 2-0 lead in the 1st inning, but his 13-pitch at bat in the top of the 3rd inning that ended up as a walk, which included 8 foul balls did load the bases for a potentially bad situation, but a Davis ground ball to Yunel Escobar began a nifty double play that ended the inning without any further incident. Wieters did have a secondary effect on Price that his long plate appearance did elevate Price’s pitch count and hastened his exit from the game after 6 innings.

Jake McGee then came on in the 7th inning and made a few pitch location mistakes. Jones made the first impression with a 2-RBI to deep left center to give the Orioles the lead again at 4-3. Misfortune again reared her ugly head for McGee in the inning after he intentionally walked Wieters and David blasted a 396-foot 3-run Home Run to right and posted the eventual runs needed to secure the O’s first win of the new season. McGee just never seemed comfortable out on the mound yesterday and might have thrown 18 strikes in his 25 pitch outing, but the Baltimore hitters made his exit swift after 2/3rds of an inning.

Mistakes happen in ballgames, that is par for the course. A pitch that stays flat or doesn’t break away from the plate is destined to be put into play and bad things can become the immediate result. Both Price and McGee had moments of flatness in this game and it cost both of them dearly with McGee getting the loss plus posting up a ballooned 67.50 early ERA. Both pitchers will find their grooves and make amends this season, but their small mistakes on this day definitely played into the Rays breaking their home opener streaks and taking Rays Manager Joe Maddon’s career home opening day mark to 3-5.

But there were also some moments in this contest that made you not only feel good inside, but built upon the confidence that a few pieces that falters at times in 2012 have been fixed and made great starts to building confidence on the field and in the stands. All around the field yesterday there were defensive plays and great moves on the base paths that showed this team again has that attitude that no game is decided until the 27th out. That kind of mentality will pay huge dividends down the road and even in this initial loss, we saw more than a few reasons to think our defensive debacle in 2012 has been rectified. 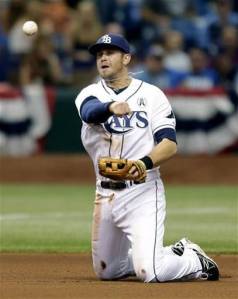 Evan Longoria definitely showed he is psyched for 2013 with 2-straight impressive defensive plays in the top of the 5th inning with the second play coming with a throw on his backside at third against the speedster Jones with his throw bouncing across the turf until James Loney secured it to end the inning. Sam Fuld who replaced Matt Joyce in left also made his presence known as well as Ryan Roberts who replaced Ben Zobrist at 2B when Zorilla went to RF and SS Yunel Escobar showed brilliance on the pivot providing a crucial 6-3 double play in the top of the 3rd to stop the O’s scoring chances.

From the Rays first hit of the season, a solo Home Run by Zobrist to RF, to Desmond Jennings RBI double in the 6th inning then scoring on a Sac Fly by Zorilla. Jennings again provided some needed magic beating out an infield single to the shortstop, then stealing his first base of the season in the bottom of the 7th inning putting him in great scoring position to secure the Rays 4th run of the game on a ground ball to 2B by Fuld in the bottom of the 8th inning. These plays show great glimmers of hope the Rays offensive woes from 2012 might have also vanished over the Winter as the Rays employed both long and short ball concepts during this first contest. 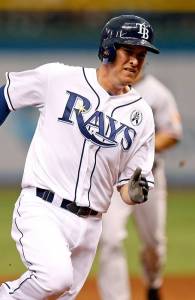 All in all it might have been a mixed bag of results for the Rays, but the team showed the type of hustle and strive for victory you need when in the course of a season a single win or loss could decide not only your fate. I know that might seem a bit fatal thinking a single loss can be so detrimental to a team, but in this high contested AL East, especially against a division rival who wants to improve on their 90+ win totals from 2012, a single loss can put you behind the 8-ball early on in the season.

Tuesday the Rays might have come out on the losing end of it all, but there were multiple bright spots to show this team’s improvement and 161 more chances to grab back this loss and get on with the grand scheme of things this season…which is securing another ticket to play deep into October.

Do not forget, this season is the 5th anniversary of the “Miracle of Baseball”, and that 2008 Rays campaign also started off with a opening day home loss to these same Orioles ( 9-6).  And we all know how that season ended up…….Coincidence, I think not.