I now call him the “Silent Avenger”. On a Tampa Bay Rays team already filled with persona’s like “Tatman”, “Super Sam” and even “Wolverine”, Rays First Baseman James Loney has been one of those great players who comes out of nowhere and makes this team better immediately.

Playing a position that embodies power and defensive responsibility, Loney has become not that iconic 1B that smashes the ball into an oblong shape on its way to the cheap seats, but has become a hitting machine producing needed single and run producing opportunities that also have brought the Rays back to the .500 mark for the first time since April 7th. Sure Loney is not the only reason this team has rebounded from their April funk, but he is one of those shining examples of a player brought in with question marks and wonder as to what role he will ultimately play on this team’s rise towards a post season berth.

All Loney has done is be a stopgap defender at the corner who has committed only a solo error in 259 total chances this season. But lost in that vital fact is the number of errors his glove has erased due to his versatility and flexibility at the First Base bag. But that is only 1 dimension of the Loney story as he has again found his hitting stroke since coming to the Rays at one point this week reaching the summit of the American League Batting Average pile along side Detroit Tiger Miguel Cabrera.

Loney currently heading into Sunday’s contest is 3rd among all MLB players in batting average (.371) behind Cabrera (.376) and Brewers OF Carlos Gomez (.374). He also shares another very vital distinction in the A L with Oakland A’s INF Jed Lowrie of 7 3-hit games this season which all transpired within 11 starts between April 17th and May 5th. Loney has not only shown the potential to produce for the Rays, he is doing it on a club once thought of as weak and full of holes offensively but has been one of those key linchpins to the Rays recent run explosions that has seen them creep from the bottom of the AL Team hitting stats.

Sure Loney (.959) might not have the Rays top OPS ranking which currently belongs to long-ball artist Evan Longoria (1.009), but he does have 39 hits in his 35 games as well as leading the Rays in doubles (11, tied for 7th in the AL). OBP (.426 which is 4th in the AL) and is second to Longo (.609) in Slugging Percentage (.533). Loney has been one of those pleasant surprises on a team that most thought would be hard pressed to produce runs much less victories this season after their horrific April start.

Want to know why the recent hitting surge of Loney is so impressive? Over his last 23 contests (17 starts) Loney leads the MLB with a .453 average with 2 HR,15 RBI and 9 doubles. But what is extremely impressive is his stat of only 4 strikeouts during this span that saw his average rise to over 200 points from its .167 spot on April 16th. Fangraphs also produced a fun fact that 33% of Loney’s hits this season have been line drives, the highest percentage in the MLB where the MLB average is 20.2 percent.

Amazingly enough Loney who is a left-handed hitter has produced a .529 average against Southpaws this season which should bode well for him as the Rays will be facing a lot of left-handed hurlers over the next week. Add on the nice stat of Loney sparking a .424 average with runners in scoring position and you get a player who is helping the team tremendously by slicing and dicing up hitting from both side of the pitching rubber. Loney is also boasting an impressive .337 average against right-handers so far this season.

And how rare was that Home Run by Loney last night against the San Diego Padres? The last time Loney deposited an offering in the his home stadium cheaps seats was September 17, 2011 in Dodger Stadium. 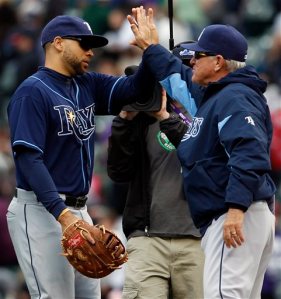 Loney has hit 8 HR on the road between those dates. Loney on May 9th also became only the 4th Rays player ever to be on the top tier of the AL in hitting with teammate Matt Joyce last doing it in 2011. Combine that with the pure fact Loney has produced back-to-back 3-hit performances on multiple occasions this season and you can see how he has transformed into a much needed silent avenger for the Rays.

Want one last reason to think Loney is having one of those dream seasons so many seem to have when they pull on a Rays jersey. Consider Loney has hit left-handed pitchers at a career .248 average heading into his Rays tenure. This season after Loney’s impressive outing against southpaw pitching during 3 starts against Toronto (May 6-9th) at the Trop produced a stellar 10-19 (.526) showcase. But the cherry on top of this is the fact during 2013 Loney has only struck out 11 times so far in 116 plate appearances which leads all MLB 1B qualifiers and had a streak of 39 at bats without a whiff this season.

Loney is definitely the silent avenger the Rays needed at First Base and has more than proven his worth.