Versatility in baseball can make you a solid career. Being able to play a multitude of position both in the infield and outfield can get you shots other players do not get. Even though INF/OF Jayson Nix has not put up substantial numbers during his trek across the MLB landscape his bag of many different gloves might just possibly keep him with the Tampa Bay Rays.

I was glancing at comments on the Rays signing of Nix to a Minor League deal which by all normal purposes has a major league invitation to Spring Training in Port Charlotte,Fl and one stuck out at me as if it was highlighted. “Smart move. Another Zobrist type except Nix has better wheels.”- MrSativa.  Certainly will not hurt Nix’s chances of staying past March that he has been exclusively in the AL East over the past 3 years with the New York Yankees (2012-13 seasons) and the Toronto Blue Jays (2011 season). Even more enticing possibly to the Rays is the simple fact that over parts of Nix’s 6 year Major league adventure he has only spent 1 season outside the American League (Colorado Rockies-2008).

Combine his versatility along with familiarity with American League pitchers and their arsenals, and you might see Nix as a possible plug-in player into a multitude of spots on Rays Manager Joe Maddon’s Chess board. You can definitely bet if Nix can secure a utility spot on the Rays 25-man roster his versatility around the diamond might be overshadowed a bit by Nix’s 19 stolen bases in 23 attempts over the last 2 seasons. Having a guy like Nix on your bench in a close game, which the Rays seem to have more than most MLB teams,  a pinch-runner like Nix can be a great weapon to have especially in the late innings or with a slow-running body nestled 60 feet from a lead. 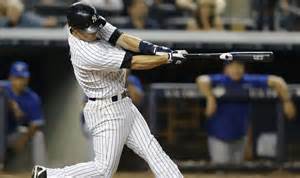 Not to say Nix’s only asset to this team might be the fact you can plug him in almost anywhere but First Base or Catcher, but having a speed guy to replace the departed Sam Fuld, Nix would give Maddon a great option when the time might call for a swift change in the game’s flow. Of course Nix doesn’t bring a huge amount of offensive prowess to the Rays evident by his career .218 average with 37 HRs and 127 RBIs over 6 seasons.

But hidden inside that same bit of career stats is the fact over the past 2 season in which Nix has had 505 plate appearances, he has also produced his highest consecutive career batting averages (.243 and .236). If Nix can again find the power stroke he had back in 2009 with the Chicago White Sox (12 HR) or 2010 with the Cleveland Indians (13 HR), he might a bit more of an offensive pop off the bench or in a utility role.

Worst thing is, this is January and every player looks like a gem in the rough right now and could be a missing piece or nice addition. By his last 2 seasons in the Bronx, Nix has shown he can be a vital cog in the overall 162 game season as he appeared in over 74 games both seasons. That kind of stat could become a vital and substantial machine cog if someone in the infield or a corner outfield spot goes down with an injury in 2014.

So maybe MrSativa is right, Nix might be a great addition to the Rays . I mean a multi-faceted speedy player who also has ample experience playing in the toughest division in baseball can definitely be a great tool to have in your game day toolbox….Sounds kind of like the same description giving about Zobrist when he arrived in St. Petersburg.

Welcome aboard Jayson, it’s going to be a fun year!