Getting That Rays Autograph Just Got Harder

The Trop pre-game fan rituals, they will be a-changing…..and not by our choice.

So if you are one of those eager young or old autograph hounds, or want a photo with your favorite Rays player, it just got a bit harder to accomplish this feat within an hour of game time.

Seems last night just after the conclusion of the New York Yankees BP, the Sentry security team which protects the field regions around Tropicana Field were informed pre-game to begin informing the amassed crowds of Rays fans who seem to migrate and linger within the Lower Bowl seating area that they will no longer have access to this area 1 hour before game time.

That means that this once prime autograph and photo real estate will be off-limits.

No longer will you be permitted to stand or await a Rays player on the rail or in the first row of seating after B P unless you possess a Rays ticket for a seat adjacent to that area.  If you seem to be loitering or waiting in this area, no matter if you are young or old, you will be instructed to leave the area. 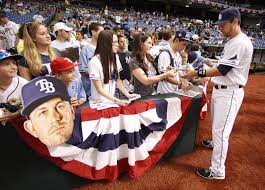 No longer will kids or adults be able to pop down and get a quick selfie with Longo, “the Outlaw” or others as they finish their pre-game runs and stretching.

Gone will be that last ditch effort some have used to get a signed ball from a player before they head into the Clubhouse or stand for the National Anthem.

Now if you want to possibly get that “must have” autograph or have a conversation with your favorite player, you might have to be there as the gates open and hope and pray the player has not participated in the early rounds of BP and have head into the Clubhouse to get “game ready”.

With this rule hitting the fan base at the Trop., you can surely bet there will be a bigger grouping of fans over the Rays or visiting dugout during their Batting Practice sessions as this area might be the only viable way now to get a last second signature.

It is not only going to make the task of getting an wanted autograph harder for the fan who planned a weekend or unexpected trip to the ballpark to get that script, but he will be fighting a larger contingent of Rays fans now who know with an hour to go the Lower Bowl area will be off limits to them.

I truly think the pure test of if this rule can be truly effective will be on the Sunday games when fans are let into the Trop 2 hours before game time and usually there is no BP by either team on that day.

Some of the Rays Field players might wander out to toss a few on the turf before Sunday matinee games, but the largest contingency will be the Rays pitching staff who come out and do long-toss and possibly a side Bullpen session.

With Sunday also being the day we celebrate Family Fun Fest, larger numbers of small children will be on hand hoping to get a glimpse or noticed by a ballplayer, possibly ending with a genuine baseball or an autograph.

What is really going to suck is seeing a small child who used to be able to come down and get an autograph all the way up to the National Anthem be turned away because they do not have a ticket in that section of seating. 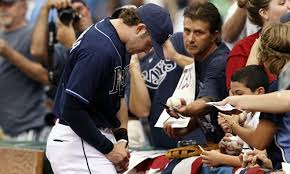 Did someone make a wrong gesture or comment? Could someone have taken a liberty that offended someone on the Rays roster or staff? Might there have been a swift hand involved that took someone’s item as they signed? Or could the worst have happened, someone took a player’s glove, cap or something else?

I have tried to get some glimpse for the quick policy change from more than a few members of the Rays staff and the Sentry security staff, but we truly might never know if this rule change might not be just a security precaution or happened because of an event that transpired between a player and fan at the Trop.

This is a blow to that Rays unique sense of small degree of separation that the Rays fans had become accustom to since 1998.  This team truly since its inception has been one of the most fan-friendly teams in sports…bar none, but now a slice of that acceptable pre-game ambiance that set the Rays apart has been eliminated.

Times they are a-changing within the Trop.

If you want that much anticipated autograph or photo you will have to get to the game sooner, post up in a valued spot along the rail or dugout and hope to garner both eye contact and voice recognition with your target before engaging towards fulfilling your goal.

Editor’s Note : I want to give Jen McKinney a shout out for awakening me to this new rule and for the 1st Photo……Thank You.

It’s possible a season ticket holder(s) got fed up with asking autograph seekers to leave their seat(s) and complained to Rays management. That’s the only thing that makes sense in this situation, and even at that I don’t recall anyone giving the seat holders grief for being asked to move? I’ve been in the position of being informed I’m in a reserved seat and I always apologize and move to another location. The only other thing that comes to mind is the players making issue of the routine. Rumor (from good sources) is that a couple of years ago the boys pushed to have access to the player parking lot restricted so they wouldn’t have to deal with post game autograph seekers. I can understand that, but to shut out PAYING fans? This move could backfire on the organization.

Jeff,
We have both seen the organization change in the past few years, some for the good and destruct long term relationships with fans both season ticket holders and the occasional fan. I have been down there myself, but always stayed in the 2nd or 3rd row of people so our smaller and younger fans can be closer.
Something happened, and the gripes of someone with monetary means makes sense for they help fuel the team more than a majority of the fan base.
I know that things have to change and that the liberties we all have enjoyed in the past might be gone forever. Saw that first with the Bullpen widening its space so fans were not right up on the player’s necks soliciting gum, candy or autographs during a game.
Heck they covered over my old section to keep people from complaining they couldn’t see when Bullpen Cafe parties were held. Funny they will risk ticket income for the now covered seats for 81 games a year while it can’t be fully financially justified as the Cafe sits empty more games than it is full.
With the changes in how we, the fans now get Fan Fest autographs and now this new limitation on coming down past B P, the reality is the Rays have matured into a team that loves it fans, but now sometimes only at an arm’s length. It’s a pity since we have embraced this team and now they want their space.

PS I wanted to be sure Jen got credit for the pic and letting me know about the issue. Hope this new rule doesn’t ever hurt your collection or getting that needed autograph.