If Florida Native Fans Embrace the Rays, Attendance Will Begin an Upswing

I get upset every time I read something about sports fans in the Tampa Bay area being “bandwagon fans”.  Such article never take into consideration only 35 percent of fans in the state of Florida were actually born here.

Florida is currently grouped with 4 other states that have between 24.3 and 44.5 of their population born in their state. Wyoming, New Mexico, Nevada and Colorado are the only other states in that group, and only Colorado has a M L B franchise.

But none of these articles or bash blogs take into account that since the 1980’s the number grew from the mid 20’s to 35 percent at the time of the 2010 U. S. Census. 15% increase may not seem to be a lot to most, but to us natives, it is more and more people who share in this region as their birthplace and should establish local sports alliances as we grow older.

But the local teams also have to embrace this fact that less than 40 percent of their fan base is locally born and take measures to ensure these fans attach themselves to their local teams before family long-time allegiance plays havoc and they lose a fan based on their parent’s sports loyalties.

Only 10 states of 1/5th of our Nation have seen over 70 percent of their population born in their state.  M L B stronghold states like Pennsylvania, Ohio, Wisconsin and Michigan are within that top tier native-born group that also include Iowa, Louisiana, Mississippi, Alabama, West Virginia, Kentucky.

If you look at the 2014 M L B attendance numbers, Detroit, Milwaukee, Cincinnati, Philadelphia and Pittsburgh were in the Top 15 for this past season.  Each of these states double the native population of the southernmost state in our country.

Just for giggles, let’s double the Rays 2014 attendance figures and see where they might have ranked in the overall 2014 if our Sunshine State had at least 70 percent of our residents born here.

Now it might start to make some sense to the Rays Republic who have been arguing over the past several seasons that the Rays fan group under 14 get the best giveaways from the team.

Combine that with the fact those collectibles mostly happen during promotional days like Family Fun Days and you get a nice uptick in attendance, plus hopefully gather more loyalty and future franchise admiration for their hometown team.

That is why the Rays roll out the carpet for the younger generation, they will be the ticket buyers who takes the Rays back to 2 million plus fans through the gates. It is not the older crowd like myself who might be loyal fans, but with our age comes some limitations both physically and economically hamper us from attending as we have in the past.

That is why the kids get the great Evan Longoria drum sets, the Summer Camps and the opportunity on Sunday home games to get the autographs of Rays players. It is a subtle but insightful way for the Rays to embrace their young fans who will turn into adult fans and then hopefully stay in the region and produce another generation of Rays fans.

Who knows, by the time we get to the 2020 U.S. Census the Florida native number might rise to 45 percent which would put Florida on the lower end of the next level of native children currently being born in M L B states which includes Georgia, Washington, Maryland and California.

Teams like the Yankees, Boston Red Sox and even the Baltimore Orioles have over 100 years or at least 3 generations of native fans who grew up and adopted their teams based on their locality. Tampa Bay has not even been in the M L B 20 years are surely does have a transient fans who still have or pull out their home town jerseys when their old team comes to Tropicana Field.

My only hope is that the younger Rays fan who enjoy these great promotions and events stay within the Rays fold and help establish a lasting Rays tradition within their future families or relationships.

The Rays have planted the seeds for the younger members of our regions to embrace their local teams. Now we just have to wait until those seeds mature here in Tampa Bay and hopefully we will still have a team to call our own and to introduce to their kids and eventually their grand kids. 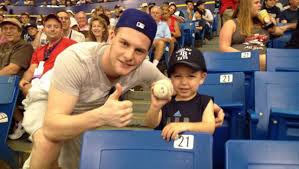 Baseball may be a business, but sometimes even in business you have to embrace the family approach and hope it expands and makes even the youngest fan want to grow up to be devote Rays fan.

If you were wondering, the Colorado Rockies ( 2,680,329 ) ranked 10th in overall  M L B attendance this season.  The Rockies have been an M L B franchise since 1993 and the 2nd generation of Rockies fans seemed to have embraced the team.

That shows even in Tampa Bay, there is hope as long as the native sons and daughters support their local sports roots.