Balfour to Visit Homeland as an MLB Ambassador 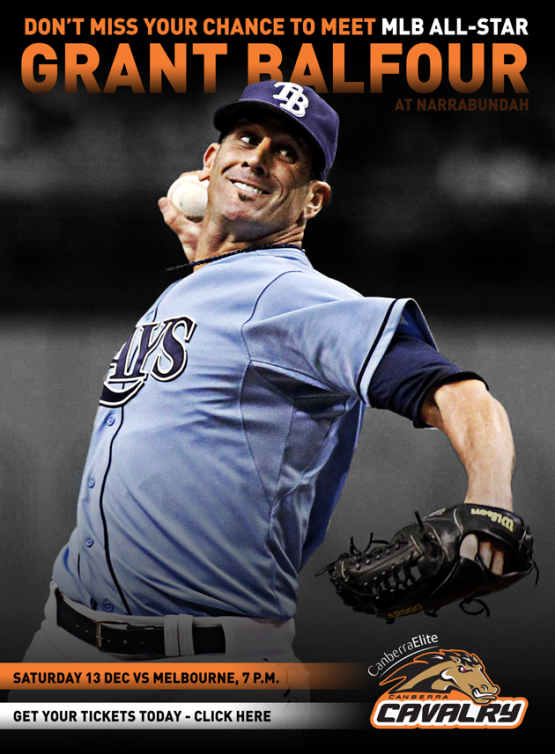 Say what you want about Tampa Bay Rays reliever Grant Balfour. Some comments center on his spiral anger issues, while other wonder why during years with even numbers his stats tend to go a bit south. 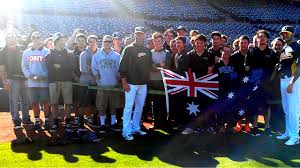 Personally, I think the guy is a great competitor and even with a few terse moments on the mound talking to baseballs and angering foes, the guy always enjoys and looks forward to giving back.

So it is no surprise to me that Balfour along with Chicago Cubs P Andre Rienzo and Milwaukee Brewers Manager Ron Roenicke will make up an extremely diverse Major League Baseball trio of Ambassadors during their trek to Balfour’s homeland of Australia from Dec 12-21st.

Some people say the “Angry Aussie” has easily compiled the best career mark ever in the M L B among those bearing Aussie roots, and so many around the baseball world and in his home country view him as a bit of a cult hero because of his tirades with those white Rawlings baseballs, and has ruffled quite a few feathers among M L N hitters. 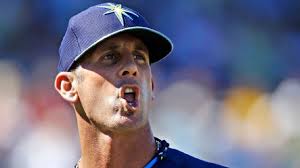 Few players display their passion on their sleeves like Balfour in the game today and his outward pouring of high energy emotions and a few choice words can polarize some baseball fans opinions of the pitcher.

But that persona of anger and disdain for baseballs of aspects of the game is not the true essence of Balfour, or the Balfour I have known during his times with the Rays. He has always been cordial to fans, stopping to talk with them, hold endearing conversations and offering friendship to many who sit around the area of the Rays Bullpen. 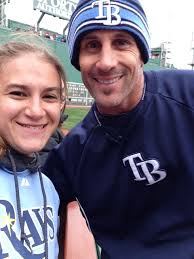 During my time in that same area of Tropicana Field, I have not seen Balfour refuse an autograph, not stop to at least acknowledge a fan calling out his name and for the most part being a great ambassador of the Rays.

So it must be thrilling for Balfour to get the chance to visit his homeland and I imagine a stop in his hometown of Kings Langley which is a suburb of Sydney.

But the fact is Balfour has done some amazing things over his 11 years playing professional baseball in the U.S. with visits to the World Series with the Rays, plus being selected to the American League All-Star squad during his tenure with the Oakland Athletics back in 2013.

Balfour and crew are expected to arrive in Sydney on Thursday, Dec 11th and enjoy a free day before commencing on the 8-day M L B Ambassador Tour.

Here is a tentative sampling of the events and activities that Balfour will attend and participate in during the 8-day MLB Ambassadors Tour:

On Friday, Dec 12th, Balfour will be present at a Welcome Home Press Conference in Sydney and then to Blue Sox Stadium and will meet fans before throwing out the First Pitch at the Sydney Blue Sox  and Adelaide Bite game.

On Saturday, Dec 13th , Balfour and his fellow Ambassadors will hold a MLB Training with the Pros session at Sydney’s Blue Sox’s stadium for local junior players.  If you have not heard about the Training with the Pros sessions, it is a long standing MLB program in partnership with Baseball Australia and the teams of the Australian Baseball League which provides hands on skill-training from Australian and foreign-born professional baseball players.

During this visit, the Ambassadors will present the Ambassador’s Cup Trophy to the ACT Junior Club with the most new baseball recruits this season.

Balfour and the group will then travel to meet fans who attend the Canberra Cavalry and Melbourne Aces match later in the day.

On Sunday, Dec. 14th, Balfour will be in attendance in Sydney and also take part in what should be an emotionally-charged tribute to his father, David Balfour, acknowledging his contributions to Australian baseball. Balfour will also be on hand to meet fans pre-game who came to watch that days Sydney Blue Sox versus Adelaide Bite game.

The group will take Monday off as a travel day and land in Melbourne.

On Tuesday, Dec. 16th, Balfour and his fellow Ambassadors will hold a press conference at Melbourne Ballpark and meet with the Australian Baseball All-Stars team members.

On Weds., Dec 17th, Balfour will serve as an honorary Team Australian Captain during the Australian All-Baseball League All-Star game that pits the best home grown Aussie talents against the best of the imported players in the league.

On Thursday, Dec 18th, the group will travel to the Gold Coast and hold a special Training with the Pros session in Coomera with local junior players.

On Friday, Dec 19th the Ambassadors will travel to Brisbane and hold a MLB Training with the Pros session at AFA  Stadium at Holloway Field. The group will then meet fans and attend the Brisbane Bandits versus Canberra Cavalry game.

It is great to see Balfour and his MLB  colleagues hit Australia this off season and give back. You have to believe it will be especially satisfying for Balfour to see how the game has grown in his home country and the heights it has reached in each of these vistas he and the MLB Ambassadors will visit during their trip.

I have no worries Balfour and his MLB crew will not only make a difference, but I know Balfour will bring back so many grand stories of how much the game has changed and how it has further impacted his life.

Can’t wait to hear a few of them while leaning on the Right Field rail this spring.