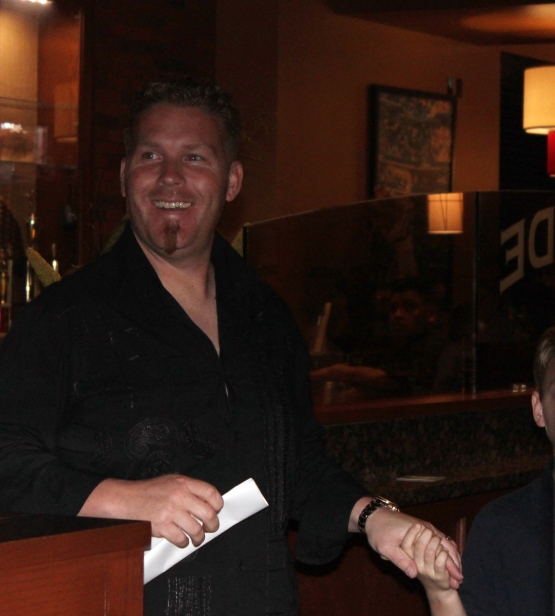 It was suppose to be a pairing party in advance of the 2012 Toby Hall and Friends Celebrity Golf Classic. It was suppose to be one of those meet and greet opportunities for the duffers to meet other members of their foursome, and also celebrate another awesome tournament. That was the plan Toby Hall had in his mind before he entered the Courtside Grille last night.

Instead it became an impromptu Retirement Party complete with the obligatory pine wooden rocking chair that party invitees were asked to sign and give their well wishes to Hall as he embarks on other adventures in his post MLB life like watching his kids grow up, and devote more time to his charity and other worthwhile endeavors. It was an event I did not want to miss.

There were people coming out of the proverbial woodwork for this honor like former Rays owner Vince Namoli who looked very relaxed and had even lost a few pounds. Former Rays Pitching Coach Chuck Hernandez came to the event as well as former Rays Bullpen Coach Glenn Ezell and current Bullpen Catcher/Enforcer Scott Cursi. The showing of support from former players on a night usually reserved for the menial task of assigning pairings was a complete success.

In the crowd was also former Rays OF Randy Winn, Toronto Blue Jays Pitcher/ Rays Bat boy Jesse Litsch, hurler Boof Bonser and Tampa Bay Bucs Defensive Back Ronde Barber. On the screens around the bar played a photo montage of Hall’s days both at Triple-A Durham, Tampa Bay and his stint with the White Sox. Food was plentiful, drinks were flowing and the room held a great vibe of well wishes and a few well placed cards and present for Hall and his family.

As the pairing were being announced, it was immediately noticeable that this season’s tournament had a few extra Rays names being bellowed out like P David Price, James Shields, Jeremy Hellickson, SS Reid Brignac, CF B J Upton, RF Matt Joyce along with Rays farm Coach Ozzie Timmons, Jason Michaels and the always entertaining Gregg Zaun. Former Rays RP Trever Miller, Dan Wheeler Andy Sonnanstine, Rays Coaches Tom Foley and George Hendricks plus that strapping young lad, FSN Florida/Rays traveling ambassador of good times Todd Kalas. The event seems to have exploded this season with the addition of several Rays player who will be first time attendees this year. The show of great support for Hall and his main charity, the Miracle League should make this the best tournament turnout and fundraising in the Toby Hall Foundation’s history. 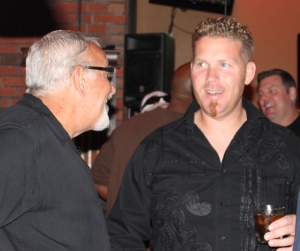 It was a great time to show our admiration and respect for a player who gave his all for the Rays, and is still considered the best to ever squat behind the plate. Hall may be leaving the game a bit earlier than he expected, or wanted, but his foundation, his children and his wife will be more devoted attention. If Hall takes to his retirement that way he called games and hit at the plate, then he will again be hitting for the fences. Go get ’em Toby!