Shoppach Finally Won Me Over

Not sure why it took me so long to see this “other side” of Tampa Bay Rays catcher Kelly Shoppach. Most just get to see that focused and persistent of his Rays game day persona on the diamond where achieving positive results are warranted and his emotional outbursts tend to be genuine to a fault. Not sure why I held a wall up towards Shoppach, not wanting to really know this guy.

It is true I wasn’t a firm member of the Shoppach admiration society when Shoppach first came to the Rays from the Cleveland Indians. I somehow initially considered him a retread version of former Rays disgruntled employee Dioner Navarro. You know, good behind the dish but mediocre standing at it.

Maybe it was his Red Sox past that kept me from seeing him in any hint of early positive light. Possibly I mis-labeled his game day intensity and focus as arrogance and bit of a conceit instead of their true intentions. Got to admit now, I wasted a lot of time avoiding this guy like the plague when I should been open to seeing his true colors.

Over the past month or so I have gotten to see a different side of Shoppach. Not from personal one-on-one conversations over a Vente cup of Starbucks brew, or even on the Rays sidelines. The avenues that opened my mind towards Shoppach was his muses and 140-character visions Shoppach displayed daily on the social media site Twitter.

If it wasn’t for his Twitter handle @ShopHouse10, I would not have known about his deep seeded Starbucks daily obsession, or his love for his old Alma Mater, Baylor University. Maybe that is what bonded me finally to Shoppach, his love for the Baylor Bears. That was the college squad I last played for before taking my next step in my football career, and I hold my moments in Waco,Texas very close to my heart.

Or maybe it was his selfless actions pre-game before the Rays first “Tweet Up” when Shoppach made a point to stroll down to the Rays Bullpen with his own personalized Rays Tweet In T-shirt nestled above his glove complete with his signature in black Sharpie. Shoppach walked over and I almost took the t-shirt, but did the Southern guy thing and made sure the girl next to me got the new found treasure.

It was a grand gesture that finally opened my eyes and mind to the honest fact that Shoppach is truly a “Good old Boy” at heart, and someone I had misjudged. Even though the first day Shoppach wrote on Twitter I made sure to re-tweet his new handle and promote a new Ray on Twitter, that moment instantly made me a Shoppach fan.

Maybe I should have known that Shoppach had those Texas traits embodied in him as I had transfused into me those 2 years in Waco. Possibly his 2010 walk-up song “She’s Country” by Jason Aldean should have awoken me, but that small but grand gesture that afternoon sealed the deal for me.

Heck, I take my cap off to Shoppach, not a lot of Rays players who boast Twitter accounts came down there that afternoon to socialize with the “Rays Tweet Family”, but Shoppach made a point to show his support, even though Shoppach was starting behind the plate that day. Pity it took me this long to see this real side of Shoppach.

Especially since these last handful of home games might be the last time I get to holler towards him as a member of the Rays. Shoppach is one of the three Rays who have pending 2012 club options that will be addressed by the Rays front office after this season. All signs point towards the Rays declining this club option considering the recent bevy of young backstops showing their skills and prowess in 2011. Shoppach’s days are surely numbered with the Rays.

But that is the nature of the business side of baseball. Sometimes you just start to see someone true abilities and intentions and they are gone. But this brief recent discovery of Shoppach’s other side will keep me checking in on him no matter where he puts his glove in 2012.

I have found a player who I can respect both on and off the field for his comments, efforts and his beliefs. Keep posting those great 140-character glimpses into your mind, I am eager to get to know a little more about @ShopHouse10 every day. By the way, I agree with your Twitter follower @LeeBarlett, Starbucks should have a local Tampa Bay confection for the rest of 2011 called the Caffe Vanilla Shopalatte….just sayin.

Your Day at the Trop To Drop 140-Characters

So how excited is the Rays Republic heading into the Tampa Bay Rays first Tweet Up? I would say as excited as a walk-off homer, complete game shutout and hitting for the cycle. Who wouldn’t be excited about sitting just beyond the shoulder of Rays Bullpen legends Scott Cursi and Bobby Ramos.

We could have a possible dancing brown bear moment, or maybe even a Kyle Farnsworth sighting. Seriously, it has been a great thing that the Rays front office and their marketing department embrace the social media phenomenon and provide a chance for the Rays Republic to possible hi the Worldwide trending board with such an effort.

That is where I am predicting this event will fall in the ranks of the Tweet Nation. Even if we just hold that sacred spot for a minute, the work, hustle and bustle would be a complete success. So that is a goal within our reach, one we can touch or type, to provide a Rays moment Worldwide. I love the sound of that personally.

We know @RaysRepubilc, the Rays official word smiths of the social media universe, will be providing interesting incentive, prizes and possible inclusion of witty banter posted during the event. Did you know the creative brainiacs behind @RaysRepublic now have over 100,000 Twitter followers? Who knows, maybe we can even get a up close and personal moment with the @RaysRepublic crew, a picture would be perfect (hint, hint).

I have heard that each person buying a special Tweet Up ticket will not only enjoy the company of other 140- character Rays fans, but will have the chance to sit in the exclusive Papa John’s Bullpen Cafe nestled just beyond the Rightfield line a stone throw away from the Rays Bullpen. Heck, it is just a soda cup away from my own old roosting spot.

Being offered even before the event in Twitter contests by @RaysRepublic will be a chance to win tickets to the event, a chance to throw out that night’s Ceremonial First Pitch that, plus a unique chance to hand the Rays line-up card to the Umpires before the game. Of course the crafty minds within the Rays Promotions department are not done there.

Also on tap is a chance to be the personal (game day) assistant of Emmy award winning  CNBC sports business reporter Darren Rovell (@darrenrovell) who like the @RaysRepublic crew sports more than 100,00 followers. Another special treat at this game will be hearing Rovell perform the National Anthem, plus have a chance to view his tweets as he moves about Tropicana Field.

The ticket package is still being finalized, but you can go to www.raysbaseball.com for updates and hopefully a official announcement and begin of ticket packages for this unique Rays Twitter experience. Who knows, you might have a chance to sit by the spirited and spunky @Lovebees, or maybe even meet the Rays twins @TBRaysTwins, or possibly get a glimpse of the lovely@Sportschix1.

Seriously now, the Rays are sporting a impressive Twitter collection of MLB player based accounts with the likes of @DAVIDprice14, @Evan3Longoria, @BJUpton2, @SamFuld5, @TheZobrists , @ShopHouse10 plus @Acobb53, @TheRuggianos, and @d_jennings15. The Rays even have a Bullpen presence with @ceez_27, @robdelaney55  and @CheckwitEck tweeting out of the Bullpen (not during games).

Even the medical staff is Twitter bound. Rays Strength and Conditioning guru Kevin Barr has a Twitter home, @TheBBRcom. You can even follow Rays In-Game host Rusty at @RustyKath if you need post game banter. Rays Manager Joe Maddon can also be found making sporadic quips, and witty banter from @RaysJoeMaddon. Last, but never least, Rays post and pre-game savant Rich Herrera can be found @richatthetrop.

Going to be a wild and exciting night where the Rays Republic far and wide can contribute and expand the Rays Way all over the World. And added bonus is tweeters who use the hashtag #RaysTweetUp will get a chance to have their tweet posted on the Rays jumbotron during the contest. How’s that for expanded media! Also heard a few whispers that each ticket holder might have future bragging rights with a special edition T-shirt just for holders of a Rays Tweet Up ticket. 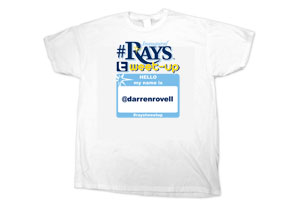 Purchase your Rays 2011 TweetUp tickets at this link (Special code word is TWEET) which will also entitle you to a personalized Rays TweetUp T-shirt, some light food and beverages while you relax and tweet from the Pappa John’s Bullpen Cafe, plus a special invite to a post-game Q and A session with Guest Darrell Rovell on the Social Media ( If he survives the scavenger hunt).

I already know you can count me in for the event, plus will have the laptop primed and ready to go before the game, and ( hopefully) well after the final pitch. Personally I am hoping to get some time with the fellow Rays Twitter Nation and talk, chat and maybe even watch the Rays take on the Toronto Blue Jays who also sport their own legion of MLB Twitter foes.

Hope to see you there (I will be sitting by Bobby and Scott)…..or just tweet me @TheRaysRenegade. I will come see you…I promise.